There are a number of culprits that increase the amount of particle pollution in the air. These include: old diesel engines and the growing number of cars on the roads, the ‘temperature inversion affect – where cold air along with pollution is trapped close to the surface of the Earth, the burning of rubbish in cities and landfills and coal power plants. However, the ‘Smokey Season’ in Thailand is especially concerning. It starts to blow in during January and February and continues until the rains come in May. In 2019, the Air Quality Index (AQI) in Chiang Mai was measured at a staggering 375 – the highest in the world – and made international news, causing tourism to drop by 30% last year.

The ‘Slash and Burn’ method has been used by rural farmers around the world for 12,000 years, since the agricultural revolution. Burning harvested crops help to remove vegetation, drive away pests, and provide a burst of nutrients for planting. A specific reason why Thai Locals set fire to the forests is to ferret out wildlife and pick an exotic mushroom, which sprouts from the charred ground. These dark, spherical hed thob are sold by foragers from makeshift roadside kiosks for as much as 1,000 baht ($33) a kg.

Today, between 200 and 500 million people use this method, roughly 7% of the world’s population – a few hundred years ago, this wasn’t such an issue, as after one or two growing seasons, the field was fallowed, or set aside to rest and the forest would return and the cycle was repeated – now, in much larger scale – it causes persistent environmental problems including deforestation, erosion, air pollution and nutrient and biodiversity loss.

So what can WE do about it?

Donate to or volunteer with organisations and firefighters

Volunteers Without Borders Foundation – We have set up our first agroforestry project in Mae Wang to reduce the spreading of fires, restore the community forest to its optimum levels in order that it may capture as much carbon as possible, and protect its biodiversity. We develop firebreaks, grow Non-Timber Forest Products, use sustainable agriculture and create partnerships with villagers to incentivise them to protect their forests. We welcome donations and have monthly volunteer opportunities for the project.

Warm Hearts Foundation – Their 5-year plan is based on incentive to help stop the smoke from agricultural fires. They are training farmers to convert crop waste into biochar and developing marketable products like biochar fertiliser and biochar briquettes. You can make a donation on their website.

Conserve Natural Forests – An important part of their project is to restore damaged landscapes by planting a variety of native species and managing restored land for several years before the regenerated forest can sustain itself. Last year they planted 190,000 trees in the Mae Hong Son province of Thailand with the help of the Thai army and the local community. This year, their goal is to plant a million trees. The donations they receive offset carbon and interns and volunteers can work with them all year round.

Food For Change – They are planting specific trees to potentially absorb and trap the tiny particulate matter in the air. Volunteers are invited to help plant trees together to control air quality appropriately by using perennial, dense shrubs and plants like Cocoa, Siamese Cassia and Tha Ling Phling that can also be consumed or sold by the local residents.

Blue Sky for Chiang Mai –  support or volunteer for this group who work with various universities, firefighters and national park rangers to put out fires, stop the sale of Hed Thob mushrooms, pick up trash and raise awareness.

Wear a mask and invest in an air purifier

The World Bank estimated that air pollution related deaths in Thailand have risen to nearly 20,000 in the past 20 years. They also estimated that each year, 2 million people die prematurely from the poisonous gases that make up smog. Symptoms can range from chest pain, sore throats, headaches, eye problems, nausea and increased sensitivity to allergens to aggravated heart disease, reproductive/neurological disorders and even cancer. P.M 2.5 (particulate matter) are smaller than red blood cells, so they can invade any organs the blood reaches, especially the lungs, heart and brain.

Protect yourself and your family from PM 2.5 particles by wearing a mask. Look for masks that specifically advertise a filter grading of at least N95, they should fit snugly around the nose and mouth with no open gaps on the sides to allow unfiltered air in. Many pharmacies in the city have these masks, or you can order them from Lazada online, make sure to replace the filters often.

Invest in or make your own air purifier and grow air purifying plants in your house and office. Make sure to also seal all your windows and doors and use a filtered air conditioning unit so that you can breathe freely while inside. Here is a list of public spaces in Chiang mai with air purifiers.
Check the air quality index and avoid going outdoors where possible. If it the air is seriously affecting you or your family’s health, leave the city for a few months.

“In mid-March, the city with the worst air pollution in the world wasn’t an industrial powerhouse populated by millions. It was Chiang Mai, the tourist-friendly cultural center in northern Thailand. “

Officially there is a 60-day no-burning rule until April 15, but enforcement is difficult because burning is considered a “way of life” here and it is widespread. Do your part by taking a photo, recording the date, time and location and reporting it to the Fire Reports Chiang Mai Facebook page. Firefighters and government organisations will attempt to put them out and fine the farmers responsible.

You can also report vehicles that are billowing black or grey smoke out of their exhausts – make a note of their number plate, type of vehicle and location and report it to DLT Chiang Mai or the Kingdom’s Pollution Control Department.

“The developing world has become a playground for the redemption of privileged souls looking to atone for global injustices by escaping the vacuity of modernity and globalisation…How about having volunteers advocate for their home country to change aggressive foreign and agricultural policies (such as subsidy programmes)? This might seem unrealistic but the idea is to get volunteers to understand their own (direct or indirect) role in global poverty. The idea is to get volunteers truly invested in ending poverty, and not simply to feel better about themselves.” Ossob Mohamud for the Guardian 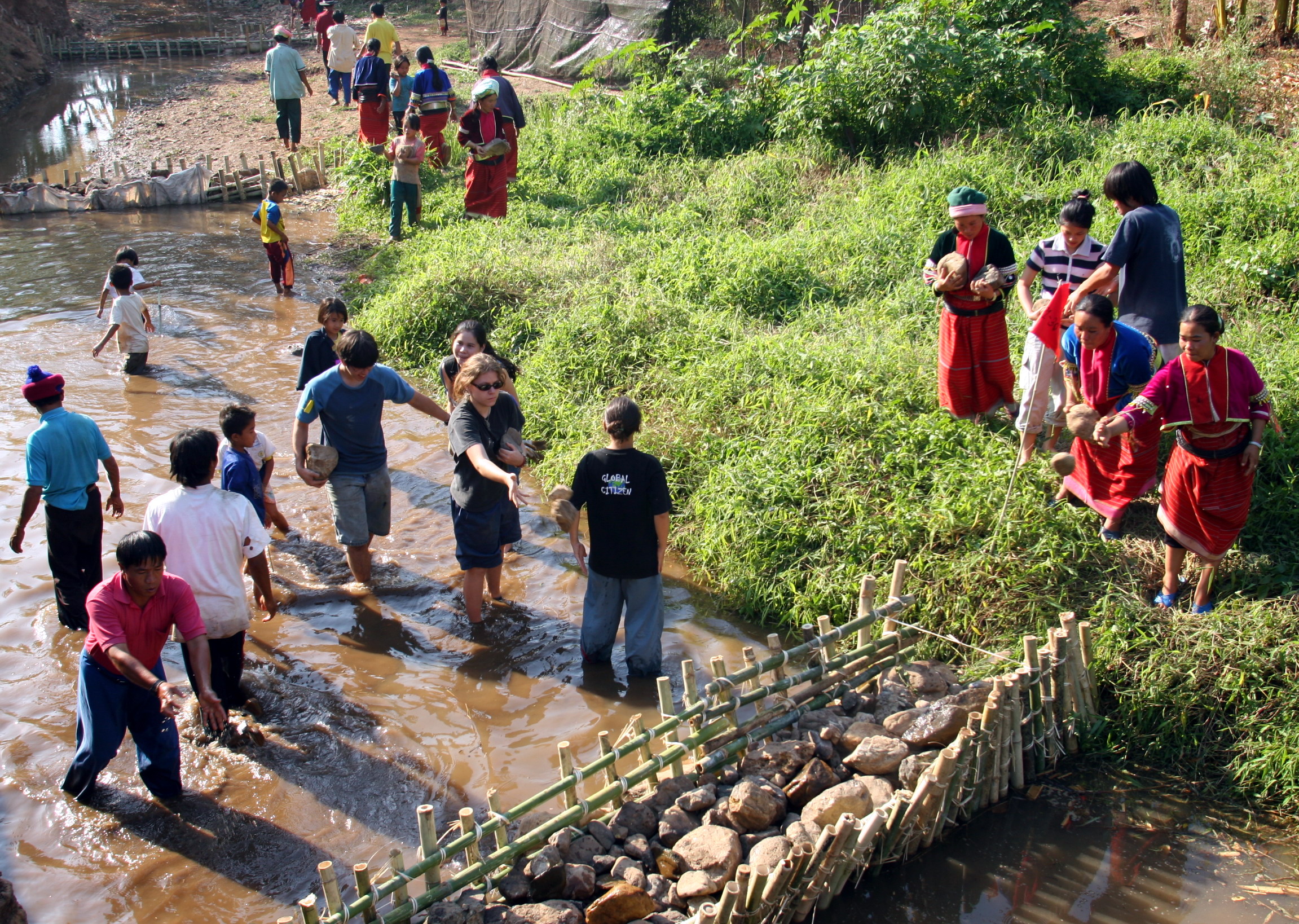 Before you visit an unknown place, ask yourself how you can help and what you can learn from it. Do you want to help a small community or contribute towards a larger picture? Do you really want to make a difference or do you just want it on your CV? Do you want to challenge yourself or do you expect to be pampered while you’re there? See what skills the volunteer programme is looking for and adapt to it. If  you want to teach English, do a TEFL course, if you want to gain experience in wildlife conservation, do an online conservation course.

2. Be wary of working with children and orphans.

You will constantly see direct attempts by organisations that work with orphans and children who lure tourists by seducing them with wide eyes and heart-wrenching stories of abandonment. This leads to clumsy attempts to do good that end up harming communities we want to help, from teenagers fresh out of school teaching English with no experience to middle-aged professionals and retirees feeling guilty and giving absurd amounts of money to “give back” to society. Too many travellers carry a naively romantic idea of doing good while on their holidays. “Unfortunately, they are led by their hearts and not their heads and unknowingly support environments that may be abusive to children,” said Mark Turgesen, international coordinator of ChildSafe Network, which protects children from abuse.

A good volunteering organisation should be transparent with their spending and should be able to give you a receipt for your payment, a list of donors, and a breakdown of how much goes where. If they have been running for a few years, expect an annual review or report published by the organisation and circulated among its donor. They should also have a decent monitoring and evaluation system used for reflection and analysis of what is and isn’t working, also ensure they have long-term project objectives that address the underlying causes of a problem, not just a temporary solution. By being aware of how projects that work with vulnerable people (or animals) can actually have a negative impact, you can ensure that you’re contributing to sustainable development — not working with exploitative organisations.

4. Learn about the place you’re going.

What communities don’t want is volunteers coming and imposing a model or a way of working that isn’t appropriate to the cultural context. Doing this well as a volunteer requires insight into your own skills and the needs of the community or volunteer placement. Learn a bit of the language, look into the history of the country and the particular area of interest you will be working in. Find out what is important to people in terms of respect and way of life, things like dressing appropriately and avoiding certain subjects of conversation can go a long way. Many volunteers are also extremely unprepared for the conditions they are going into, be ready to see extremely impoverished villages, traumatised populations or dangerous conditions.

The best projects are those where external expertise and local expertise join together in a fruitful meeting of minds and commitment. The key is to build capacity within the community through working alongside them and learning from each other – give trainings if required, see how you can make your role as a support system eventually unnecessary.